I Wanted a CO2 Sensor, I Got a Fart Detector

In the everlasting quest of optimizing my sleep, I recently started measuring air quality in my bedroom. I hope to write up the setup at a later time; here, I’ll focus on some surprising results.

The first surprise came when I left the house. While having lunch at work, I quickly checked the sensor readings. There had been a huge spike in the morning - more than 12.000 ppm! Insane! How could that happen? Secret flatmates? A zombie invasion? Surely, there must have been a mistake.

The next day at noon, I checked again. Another crazy spike had occured. The next morning again. And the next.

No, this wasn’t about me doing a number two (“deploying”). Although that was one of my theories. It turned out to be my deodorant.

So, any time I’d leave the house I’d use deodorant spray. For some reason, this drastically lowers gas resistance which results in a false-high reading of eCO2 (and probably a true-high reading of TVOC). Hair spray also triggers it.

I moved on to test this hypothesis by not using those sprays in my bathroom but instead outside on my balcony. That was quite awkward. Imagine spotting a half-asian guy, sleepily walking out in jogging trousers onto his balcony and spraying himself with things, then casually walking back in.

What causes the high readings on the sensors? I’m not sure whether it’s the organic “smell” part or the gas itself (butane?). My bet is on the smell. Read on to learn why. 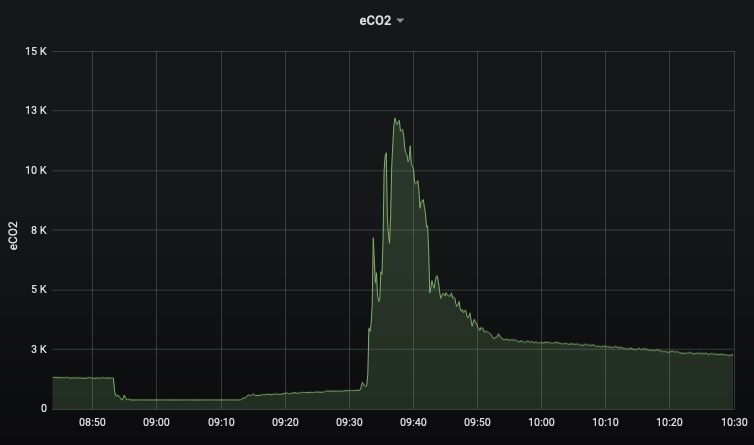 Getting ready in the morning. Spray spike at 9:38 am

The Other Morning Spike

Some days, there was another spike in the morning. But this one happened earlier.

Discovering this was fun. In woke up one morning and reached for my phone to check the CO2 values of the night (what else?). While moving under the duvet, I got reminded of yesterday’s lunch. You must know, I frequently go to the Indian place next door with my colleague Narendra. As you may have guessed, a plume of toxic fumes wafted out which had been trapped there the entire night.

After regaining consciousness, I focused on my phone again. The graph of both eCO2 and TVOC was shooting upwards! Insane. It was detecting my accumulated farts in real-time. 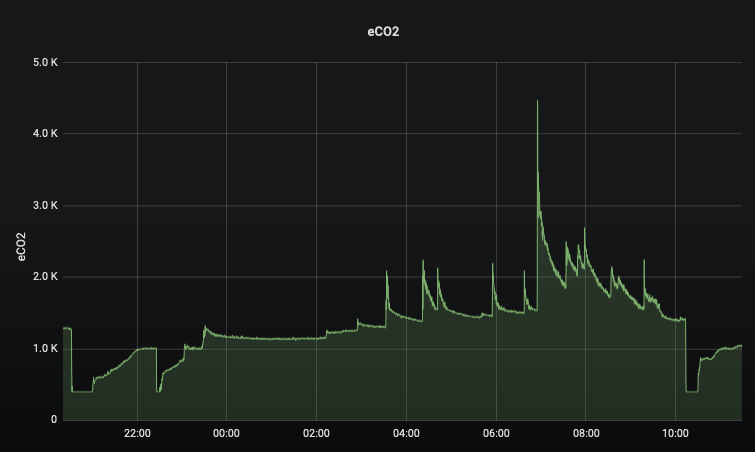 Not quite a starry night, rather a farty night. Check out those peaks.

Measuring What I Actually Wanted To Measure

Apart from these distractions, what did I actually want to measure? This turned out to be surprisingly hard because I’m not sure if the sensor was really accurate.

When I’m not home, nothing in my flat should be emitting CO2, therefore the values should be stable. Turns out, they’re weren’t. I don’t know why.

There seems to be some day/night periodicity in there but I can’t figure out what it is. It could have to do with the humidity compensation of the sensor. Or, temperature. Or, the traffic of cars on my street even though my windows are closed? Or, my plants jumping out of their pots and having a party? 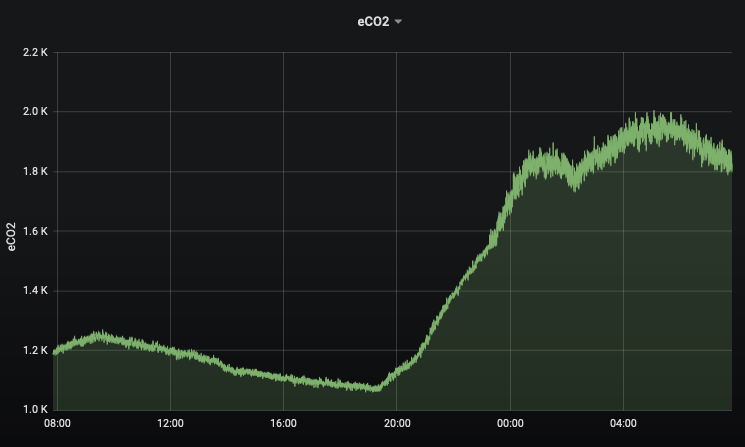 Not at home. Is there a party going on at my place?

There’s also this other phenomenon that, with open windows, eCO2 levels are at 400ppm (the minimum the sensor can measure). That makes sense. As soon as I close the window, values rapidly jump up to 1.000ppm for no apparent reason. And then, during the next few hours, they don’t rise linearly but instead plateau somewhere at 1.5k or 2k, but never really at the same value. This can also be seen on the fart graph above, if you ignore the peaks.

There’s surely a lot more about measuring CO2 which I have yet to learn.

Some nights are actually just as I would have expected them to be: An almost linearly rising value of eCO2. The graph below shows a night in which I left by bedroom door open which increased the total “connected room volume” considerably as it now included my hallway and kitchen.

During this night, values peaked at 2.5k ppm. That’s concerning because, apparently, drowsiness can already be experienced at 1k; at 2k, it gets even worse: Loss of cognitive function can occur, often accompanied by other complaints like headaches. 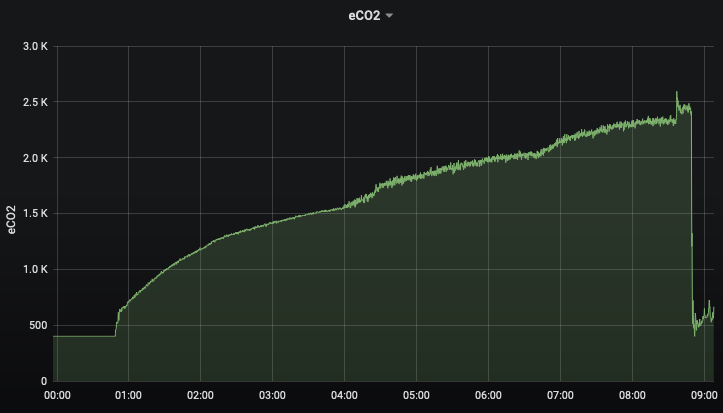 A Night With Bedroom Doors Closed vs. Tilting a Window

I usually keep my bedroom door open. But recently, friends came to visite me for the weekend which made me close it for the night. My bedroom is rather small so it would be very interesting to see whether this had a measurable impact.

The results are staggering (left side of graph). Ignoring the peaks / farts, eCO2 values reach up to 6k ppm. That’s already way beyond significant cognitive impairment! No wonder I felt crappy the next day.

The next night (right side of graph) my bedroom door stayed closed but I tilted the window. eCO2 values were much lower and it didn’t seem to accumulate - which makes sense. 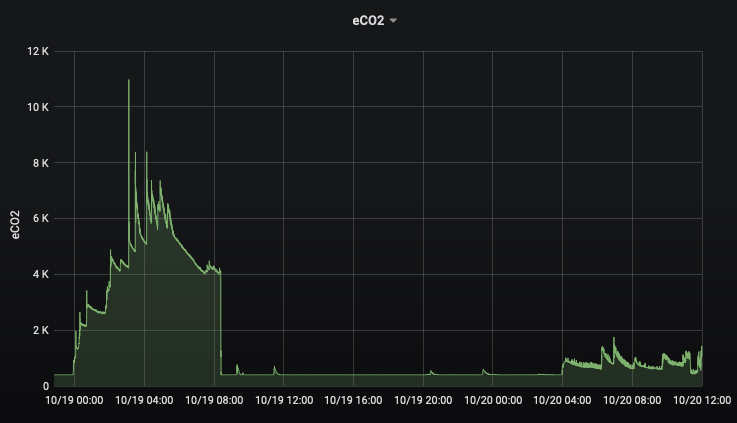 Damn, you read this far?

Let me make you an offer you can't refuse: Subscribe to my newsletter and be the first to read my new articles! 5 happy subscribers (including me) and counting.